(Epistemic status: everything except the last point comes from a textbook, so pretty solid.)

Right now I'm reading Avi Chaudhuri's Fundamentals of Sensory Perception and enjoying it immensely. I decided to do a post on the important parts of each chapter, because I'll probably need this groundwork laid to make interesting points later on.

There are things going on inside your head. (I feel like I've mentioned this before.) There are also things going on in the outside world. Ideally, we expect these two things to be related. But just how are they related? And how much? If I hear a really loud sound, how does my perception of the sound relate to the actual magnitude of the sound wave hitting my ear? The attempt to answer these question is the aim of psychophysics- i.e. the study of the interaction between the physical world and your psychological states.

How do we quantify the magnitude of sensation that happens in response to some external stimulus? There are two main ways to do this. One is just to present the test subject with some stimulus and ask them to rate it on a scale. The other is more subtle- you present the subject with two stimuli that are very close together, and see whether they perceive the stimuli as having the same magnitude or different magnitude. By doing this a number of times, you can find out precisely how much of a difference you need in order to tell that
This interval is called, appropriately enough, the just noticeable difference, or JND.

$I$ is the actual physical intensity of the stimulus- for instance, decibels of sound, lumens of light, pascals of pressure, etc. $J$ is a measure of JNDs. More specifically, to compute $J(I)$, you start from the minimum intensity at which you can perceive any stimulus, and set $J = 0$. Then turn up $I$ very slowly. Once you hit the next volume that you can definitely tell is louder, set $J = 1$, then turn it up again, marking each time you increment another JND. (This is the theoretical way you would do it- the actual experimental technique is less predictable to the subject.) $S$ is the magnitude of subjective sensation, as directly reported by subjects.

The goal of psychophysics is to find the form of the function $S(I)$ for each sense. We do this by finding $J(I)$ and $S(J)$ and then composing. To find $J(I)$, we use Weber's Law, which states that the amount of additional intensity you need to go up another JND is directly proportional the present intensity.

Here's the equation. (If you don't know calculus, just trust that it restates what I just said in equation form.)

Here, $k_{W}$ is a dimensionless constant that is different for each type of sense. For instance, $k_{W}$ is 0.07 for smell, and 0.2 for taste. If you know how to integrate, it is trivial to take this and turn it into Fechner's Law
Fechner's Law
\[J = \frac{1}{k_{W}} log (I)\]
So far, so good. The problem was that back in the day Fechner and Weber made the perfectly reasonable assumption that $J$ and $S$ should be the same (up to some scaling factor). But as is often the case with things that feel like they ought to be true, this assumption didn't hold. Goesta Ekman proposed in 1965 that actually the relationship between $S$ and $J$ is linear, just like in Weber's law.
Ekman's Law
\[\frac{dS}{dJ} = k_{E} S\]

But here's the craziest thing I learned: unlike $k_{W}$, which is different for each sense, $k_{E}$ is the same for all senses.

What is this I don't even.

So Fechner and Weber were wrong, but not as wrong as they could have been- $J$ is not directly proportional to $S$, but since $k_{E}$ is constant, $k_{W}$ does determine the power law. You can get all the information you need just by looking at the JNDs.

Okay, so that's all fine. Some sensations are more or less intense than others, and there's a predictable pattern by which intensities in the real world map into subjective intensities. If evolution is doing its job, this is what we expect to happen.

What if we try comparing the magnitude of different senses? Consider the following question: is the volume of a thunder clap as intense as the flash of the lightning bolt? A physicist would tell you that this is a nonsensical question since you're making a type error. Lumens are completely different from decibels. On the other hand, if you ask anyone with a brain this question, they can give you an answer. And it turns out that the answers that people give are consistent in exactly the way that you would expect if there were some universal measure of intensity in your brain. Since senses are often referred to as modalities, this type of comparison is known as a cross-modal comparison. 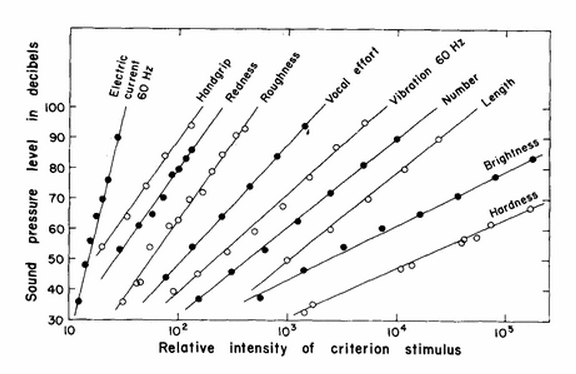 This plot shows data from an experiment where they asked subjects to do just this sort of comparison. They were given some stimulus along with a noise, and they were asked when the stimulus seemed to have the same intensity as the noise. They then plotted the points of equal intensity on this handy-dandy log-log plot and fit lines to them. (Recall that a power-law function is a straight line on a log-log plot, with slope given by the exponent.) The lines that they fit returned the same power law exponents that they found in the power laws for individual senses. This is evidence in favor of the idea that there is a universal sense of intensity in your brain.

It is important to note at this point that there are stimuli that don't obey a power law. Specifically, if we look at frequency of sound or light, we can measure a JND for each, but we can't map this JND to a consistent function like $S$. Different pitches feel different, not bigger or smaller. Different wavelengths of light look like different colors, not like more or less intense colors. So this $S$ quantity is not universal- your brain doesn't quantify everything that can be quantified, but it does quantify a lot of things on the same spectrum.

If one thought about this a little too hard, ruminating on the fact that $k_{E}$ is constant and that the capacity for cross-modal comparison exists at all, one might start to suspect the existence of some sort of filter that would process all of the incoming senses and give them weights so that you would know which was most important.

If you've been paying attention, this sounds suspiciously like Brian Mathur's "saliency filter" hypothesis about the claustrum.