In the last links post, I mentioned a famous article by Jared Diamond where he lays out his argument that agriculture was the worst mistake in the history of the human race.

I recommend reading the whole essay, but the gist of it is this: the transition from hunter-gatherer to agricultural lifestyle caused:
The argument for (1) is simple- farmers lived on simple starches without much nutritional value, as opposed to hunter/gatherers who had a more varied diet. Furthermore, depending on one crop as opposed to many natural sources leaves you more prone to disaster. Diamond also gives compelling evidence for (2) and (3), but how exactly do these things happen? Network theory, the study of the structure of systems of connected things, may be able to help us answer this.

We can model the connections between people as a graph. Each person is a node, and each friendship between two people is a link between two nodes. The number of links that a given node has (i.e. the number of friends a given person has) is known as the degree of that node. The most important feature of human social networks is that they are scale-free. This means that the number of nodes with a given degree scales like a power law. This leads to networks that look like the one in the middle of this diagram:
Looking at the picture, you can see that it captures some simple features of people's interactions- there are a few really highly connected people and more out on the periphery. It also captures some non-intuitive but true things, like the fact that on average your friends have more friends than you, are richer, happier, more successful, and probably better in every way.

This type of network is called scale-free because it tends to look the same regardless of how big it is- you see this type of organization regardless of whether you look at groups of teenagers or entire nations. (When people tell you the real world is just like high school, they mean it.) But more importantly, it rules out a very large number of possible ways a network could be connected, like the random network on the left, the hierarchical network on the right, or a regular lattice of connections, or anything else you could think of that doesn't have this power law distribution of degrees.

Today, I listened to a great lecture by Nicholas Christakis on the structure and evolution of human social networks. The entire talk is great, but I was particularly drawn to the part where he talked about social networks in the Hadza, a hunter-gatherer group in Tanzania that has a few hundred people in it. (I am not sure whether Diamond is talking specifically about the Hadza in his essay, but it seems likely.) When Christakis talks about the Hadza, it's all about how they're the same as us. All of the quantifiable aspects of their social networks- the degree distribution, as well as a number of other important measures - are the same.

So if the network structure was the same for the hunter-gatherers as for the farmers, where did the inequality and disease come from? The point on disease has a very simple answer- the networks grew in size. Scale-free networks have a relatively short distance between any two people (the famous "six degrees of separation" rule), so as the network grows you essentially remain in close contact with every new person added to the network. Inequality is a bit more tricky. Naively, I would expect that inequality results from a restructuring of networks, but we've already seen this isn't the case.

One key feature of Hadza society is that you are supposed to share food with members of your camp. However, whenever there's a migration from place to place, people can change from one camp to another. The researchers looked at differences in generosity between people and noticed that between-camp variability of generosity was greater than in-camp variability. There seemed to be a filtering effect where camp movement made generous people clump together.

To test this hypothesis, they did an experiment using people on Mechanical Turk. They paid participants to play an iterated game with each other in which you could either cooperate or defect with your neighbors. Some of the participants were placed in fixed networks- they were paired up with a particular set of players that they played against over and over again. Some were randomly assigned new network connections each round. Others were allowed to update parts of their network. Each round, the experimenters picked some of their neighbors at random (either 10% in the "viscous dynamic" model, or 30% in the "fluid dynamic" model) and the subject could decide whether or not to play with them in the next round.

The results are summarized in the graph below. In all cases, approximately 60% of the players started off cooperating, but the fluid dynamic model (the one where people had the most control over their networks) was the only one where cooperation persisted over time. 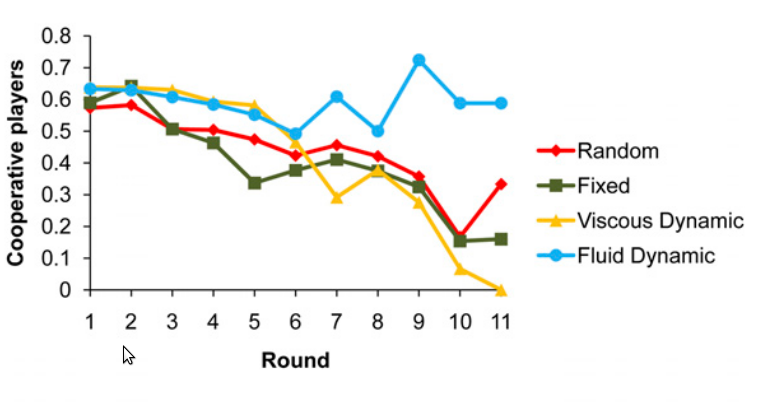 (An astute social observer might note that this explains the tactics of players in the well studied "family holiday party" model of kin dynamics.)

The key difference between farming and gathering is that being tied to a farm that you need to maintain requires that you update your network less- you need to make sure to stay tied to the people who are in control of the resources.

We see that moving to a farming model does not create a different network structure- rather, it allows for the long term persistence of non-cooperative behavior by restricting network update. Or to put it another way, hell is not being able to get away from other people.

More generally, we could say that the worst mistake society can make is developing any system where ties to resources prevent network update. However, this is a bit too close to hardcore libertarianism for my comfort, and there are good reasons to believe this might not be true in general.