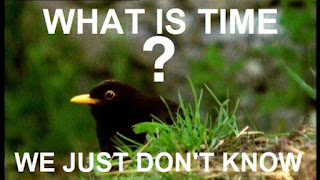 We don't know why time has a direction.


The fundamental laws of physics are symmetric: they don't make a fundamental distinction between the two possible directions that time could flow. Since they are deterministic, the future determines the past in the same sense that the past determines the future. That said, humans experience time flowing in one direction, and the external world seems to actually change in systematic ways from past to future. The two main explanations I've heard of this phenomenon invoke thermodynamics (specifically entropy) and evolutionary psychology. But both of these explanations are insufficient.

There are two problems with increasing entropy explaining the arrow of time. The first, and simplest, is that increasing entropy is a law for thermodynamically closed systems, but humans live in open systems that are far from equilibrium. They can easily observe entropy decreasing locally by stepping inside a walk-in refrigerator. It is possible to claim that the arrow of time is fixed by the global direction of increasing entropy, but this seems implausible. How does radiation flying off into the vacuum lightyears away impact an observer's experience of time?

The second problem is more philosophical. If you take Bayesian epistemology seriously, probability exists only as weighting of possible world-states in the mind of an observer. The world has exactly one deterministic state, and any information transfer is a result of our uncertainty about that state. Then we get the following argument:

So entropy is in some sense a human-defined concept. That brings us to the next possibility:

Evolution
If the forward flow of time is a human concept, why do we even need to make reference to thermodynamics? Humans are animals generated by the process of natural selection, after all. There's no reason to be able to view all of spacetime as a perfectly symmetric simultaneously existent manifold unless it's adaptive. So, the story goes, humans see time flowing in one direction because that makes them better at eating and having sex. But evolution by natural selection has a built-in arrow of time. Genetic material is duplicated and destroyed.

Note that natural selection doesn't not have the same philosophical problems as entropy since it's not inherently probabilistic. The variation between generations doesn't need to be probabilistic in order for the overall pattern to work, even though we usually think of variation as random

Other biological concepts are unlikely to help either. Specific explanations of the construction of subjective time in the brain also rest on physical models that presuppose an arrow of time.

If I had a strong idea on how to solve this problem, I probably would have stayed in physics. However, I have a sneaking suspicion that the answer lies somewhere along the intersection of quantum and classical information, or quantum mechanics and natural selection. I am partial to the idea that there exist symmetric observers in different components of the universal wavefunction that experience time, entropy increase, and natural selection proceeding in the opposite direction from us. The two contrapuntal timelines would "trade" information such that total information is conserved.

Determining whether this idea makes any sense at all will have to wait for another day.